Not only is he one of the wealthiest people in the world, but he’s also a philanthropist, an author and even a knight. 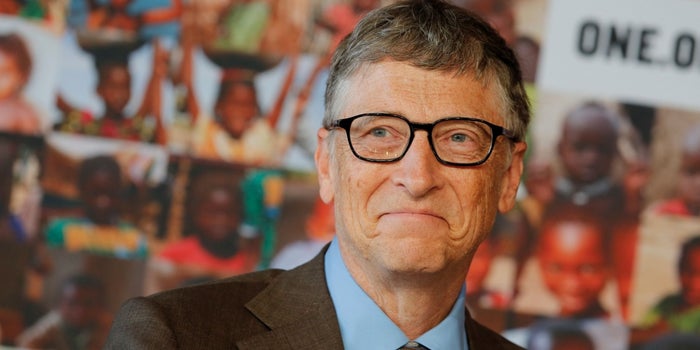 With a net worth of more than $86 billion, Bill Gates is known for being one of the richest people in the world. But there’s a lot more you probably don’t know about the Microsoft co-founder.

Gates was born in Seattle in 1955 and discovered his passion for technology early on. In school, he met long-time friend and future co-founder Paul Allen. Together, they launched another small-business venture before coming up with the idea for Microsoft.

Until he realized his desire to pursue computers, Gates had planned to become a lawyer and studied pre-law at Harvard. He eventually dropped out, launched Microsoft and met his employee and future wife, Melinda. Today, Gates is not only a self-made billionaire and tech leader, but he’s also a philanthropist, an author and even a knight.

Check out these 20 surprising facts about Bill Gates.

After spending a few years in public school, Gates later attended the Lakeside School, a private preparatory school in Seattle. It was there that Gates discovered his passion for computer programming and met Paul Allen, who became his close friend and later Microsoft co-founder. He also developed his first computer software program at age 13. Using BASIC computer language, the program was a tic-tac-toe game in which players could compete against the computer.

2. Gates fixed his high school’s class scheduling software so he was in all-girls classes.

The Lakeside School recruited Gates to help code its class scheduling system. Gates took advantage of his new task and his coding abilities, and he and his long-time pal and later Microsoft co-founder Paul Allen tweaked the school’s scheduling software and placed Gates in all-girls classes.

“Paul did the computer scheduling with me. Unfortunately for him he was two years ahead of me and he was off to college by then. So I was the one who benefited by being able to have the nice girls at least sit near me,” Gates shared with BBC. 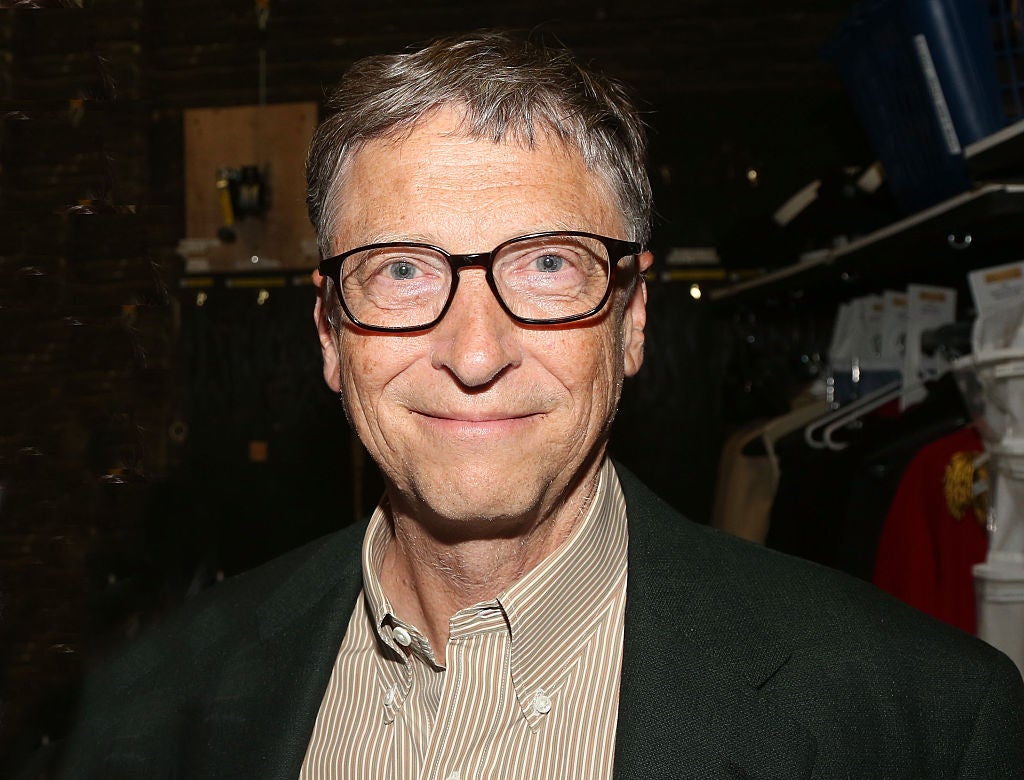 3. Gates and Allen formed a business partnership before Microsoft.

From the moment they met in middle school, Gates and Allen became friends — likely because of their common interest in computer programming. While in school, the two formed a company called Traf-O-Data. They put together a small computer based on an Intel 8008 chip that measured and analyzed traffic data for the Washington state highway department. Gates and Allen made about $20,000 from the venture, but it slowly dissolved as Allen went on to work for Honeywell in Boston and Gates enrolled at Harvard.

4. He almost had a perfect SAT score.

It’s hardly shocking that the genius got a near-perfect score on his SATs. Gates scored a 1590 out of 1600 on the college entrance exams.

In 1973, Gates began studying pre-law at Harvard University, planning to follow in the footsteps of his lawyer father. Although by his sophomore year, Gates’s plans changed and he began taking some of the school’s most rigorous math and science courses. Then, two years into his Harvard career, Gates dropped out to pursue Microsoft.

6. Gates was arrested twice for his driving.

There’s speculation that the generic user icon in Microsoft Outlook 10 is actually a silhouette of Gates’s mugshot.

After graduating from Duke University in 1986, Melinda Gates landed her first job at a startup — Microsoft.

“I just thought, ‘Oh my gosh. I have to work at this company. They are changing the world. And if I get an offer, there’s no way I’m not going to take it,’ ” Melinda told CBS News.

Melinda scored the job, and shortly into her time working there, she made a great impression on the boss.

“I met her at a New York City sales meeting,” Bill told CBS. “And then it was only a week or so after that, that I went up to her in the parking lot and asked if she wanted to go out.” 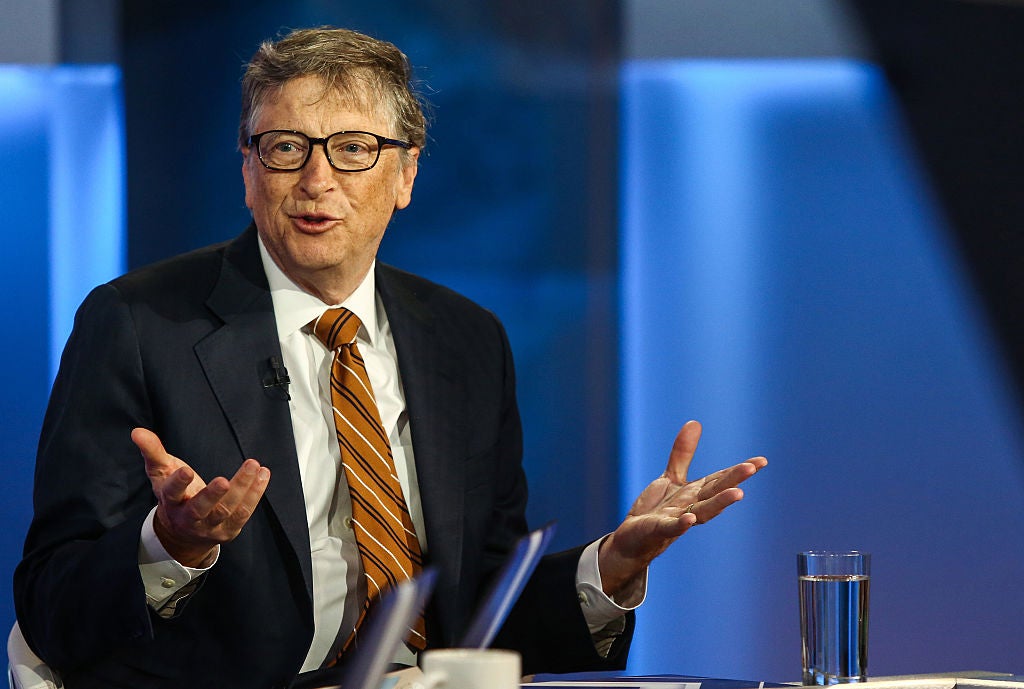 8. He was once the youngest billionaire ever.

Gates made his first billion in 1987 at the age of 31, making him the youngest billionaire ever at that time.

9. On his wedding day, he rented out every room at the hotel.

To ensure privacy, Gates rented out all 250 rooms at the Manele Bay Hotel in Lanai, Hawaii, where his wedding party was staying. At the time (1994), Gates was the second-richest person in America. Taking an extra precaution to keep the media and paparazzi from flying overhead, Gates reportedly hired all of the helicopters on Maui, too.

10. He used to memorize his employees’s license plate numbers to keeptabs on them.

You’d think a simple punch card or check-in system might suffice — not for Gates. Gates memorized the license plates of his employees so he would know when they arrived at and left work.

“I knew everyone’s license plate, so I could look out in the parking lot and see when did people come in, when were they leaving. Eventually I had to loosen up, as the company got to a reasonable size,” he revealed in an interview with BBC Radio 4’s Desert Island Discs program.

Besides his private plane, Gates’s other big splurge was Leonardo da Vinci’s Codex Leicester manuscript, which dates back to the 16th century. In a 1994 auction, Gates won the manuscript for $30.8 million, making it the most expensive book in the world. Gates sometimes puts the book on loan to museums.

In July 1995, at 39 years old, Gates became the richest man in the world with a fortune of $12.9 billion. He has since lost that title a few times, but he held the top spot on the Forbes World’s Billionaires real-time ranking in March 2017.

13. He got pied in the face during a trip to Brussels.

During a 1998 trip to Brussels, Belgium, Gates was on his way into a meeting with more than 400 Belgian educators, business leaders and government officials. Upon entering the building, Gates was struck in the face with a pie. After the incident, Belgian prankster and personality Noel Godin took responsibility for the prank, and Gates didn’t press charges.

“The pie wasn’t even that good,” a Microsoft spokesperson reported Gates as saying. 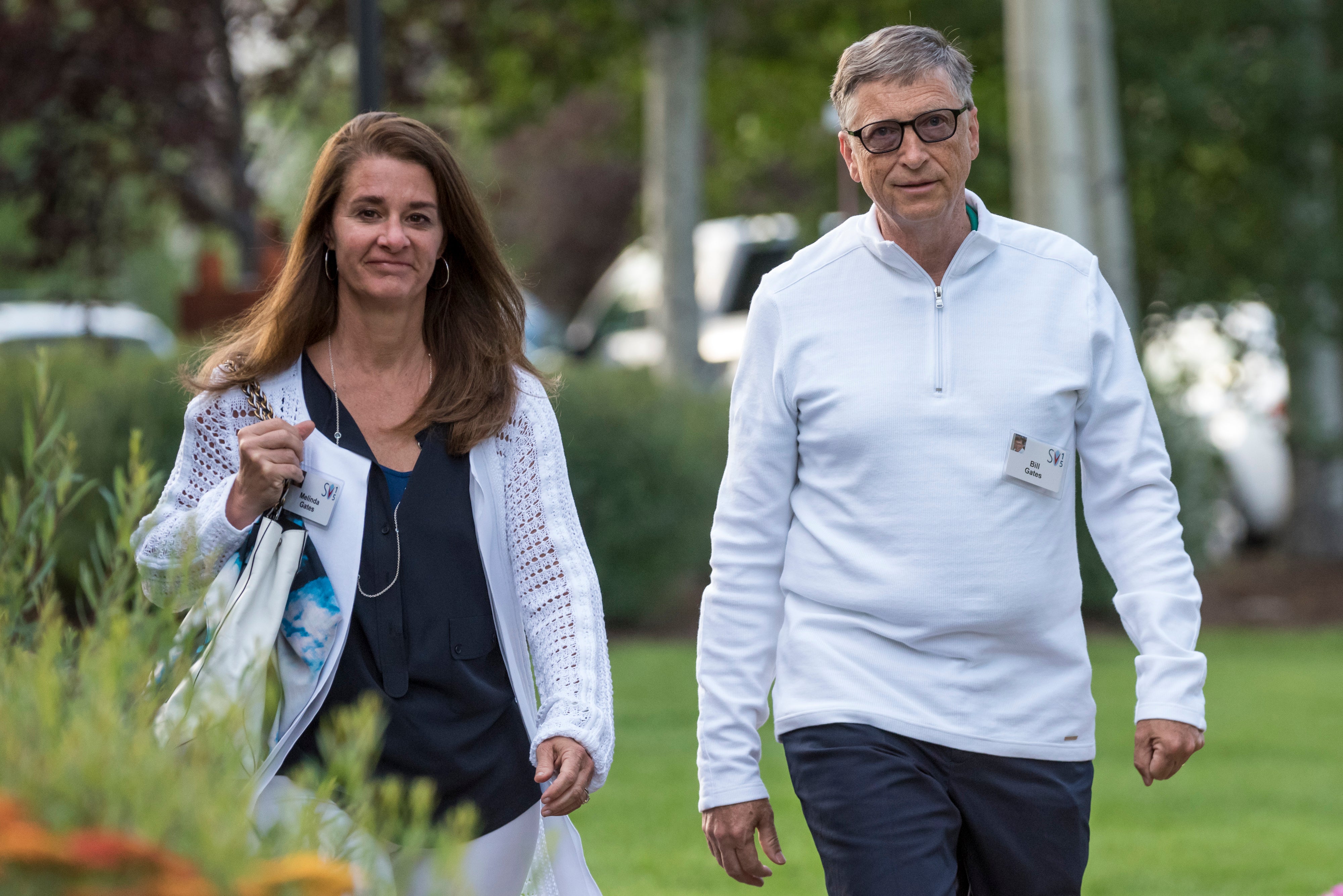 14. Bill and Melinda Gates run the largest private foundation in the world.

The couple launched the Bill and Melinda Gates Foundation in 2000. With donations from major investors, public figures and celebrities such as Warren Buffett, Hillary Clinton, Madeleine Albright, Jack Nicklaus and Big Sean, it has become the largest private foundation in the world. In 2015, it reported a $39.6 billion trust endowment.

In 2005, Gates received an honorary knighthood from Queen Elizabeth of England for his charitable work and achievements in technology. Gates and his wife, Melinda, met the Queen and the Duke of Edinburgh at Buckingham Palace for the ceremony, during which he received his “KBE” title — Knight Commander of the Order of the British Empire. Gates is unable to be referred to as “Sir” because he is not a British citizen.

16. The number-one thing on his bucket list is not dying.

In 2013, Gates held an Ask Me Anything (AMA) session on Reddit. During the session, Gates was asked if he had anything left on his bucket list. His response? “Don’t die…”

17. His bedtime routine involves reading … and washing the dishes.

Even the richest man in the world makes time to complete his house chores. In a 2014 Reddit AMA, Gates shared that he washes his family’s dirty dishes every night. He even finds the task enjoyable. “Other people volunteer but I like the way I do it,” he said.

In addition to washing the dishes, another part of Gates’s bedtime routine involves reading for an hour. Even if it’s late into the night, he makes sure to get in a solid 60 minutes before bed, because for him, “It’s part of falling asleep,” he once told The Seattle Times.

18. If he could have a superpower, it would be “more energy.”

In their 2016 annual letter, Bill and Melinda shared the superpowers they wished they could have. The first things to come to mind for the average person might be x-ray vision, invisibility or time travel — but Melinda and Bill said they wanted more time and more energy.

Bill said he wished for more energy, explaining that many people underestimate the importance of energy access — from turning on a light switch to pressing the power button on a laptop. “Without access to energy, the poor are stuck in the dark, denied all of these benefits and opportunities that come with power.”

In their 2017 annual letter to Warren Buffett, who donated a chunk of his fortune to the Bill and Melinda Gates Foundation, the couple wrote that 122 million is their favorite number. It is the number of children’s lives that have been saved since 1990 as the mortality rate has declined. 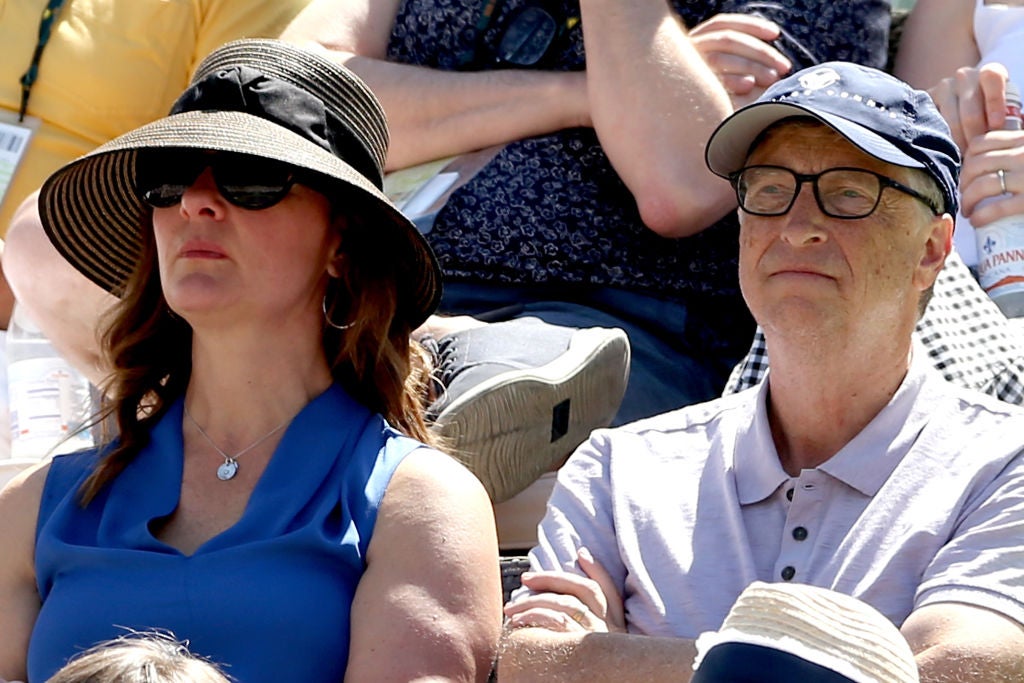 20. To disguise himself, Gates wears a hat.

To ward off any unwanted attention, Gates resorts to an old-school tactic — wearing a hat. During a 2017 Reddit AMA, Gates was asked if he ever disguises himself in public.

“I sometimes wear a hat,” Gates wrote. “For example when I did college tours with my son I wanted the focus to be totally on him. A lot less people recognize me when I have a hat on or else they realize I am trying to be incognito.”

21. Bill and Melinda Gates are giving $10 million to each of their kids.

As of March 2017, Forbes reports Bill Gates’s net worth to be $86.6 billion. That’s why it comes as a surprise that he and Melinda are planning to give only $10 million to each of their three kids. It’s a massive figure to most of us, but it’s pocket change for this billionaire. Most of the Gates’s fortune will go to charitable foundations, including their own Bill and Melinda Gates Foundation.

22. He doesn’t do his own grocery shopping

During a visit to the Ellen Show, host Ellen DeGeneres put Gates through his paces to see if the billionaire, who by all rights is very knowledgeable about the state of the world, could guess the prices of everyday grocery items. When was the last time the Microsoft founder set foot in a store to do his own shopping? “Long time ago,” he admitted. Spoiler alert: He very sort of passed the test, with a little help from the audience.

23. He typically doesn’t do big purchases, with one exception.

In an interview with Ellen DeGeneres, Gates shared that even after he became a billionaire, he always erred on the side of caution. “I always wanted to have enough money in the bank so that even if our customers didn’t pay us for a year, we could still keep paying everybody and do the R&D,” he said. While Gates confessed to not having particularly extravagant tastes, he said that he has used his fortune for some transportation-related purchases — a porsche in the early years and a plane for Gates Foundation travel. But there is one whimsical exception to the rule. “We have a trampoline room in our house. The kids like that. Indoor trampolines. I recommend it,” Gates said. “It’s a room with a very high ceiling.”